Above left: Gary Weaver (left), the new addition to SBCA’s Hall of Fame. “He certainly deserves it; he’s just a good guy,” says SBCA Treasurer and President-Elect Jack Dermer (right). Above center: Dan Holland (left), with the Industry Leadership award. “He’s always thinking. It’s just amazing how smart he is,” says SBCA Past President Rick Parrino (right). Above right: Jerry Vulgaris (left) receives the Industry Enthusiast award from Mike Ruede (right). Jerry’s passion for what he does is still growing: “It seems like every few years you find something else that’s rewarding in the industry,” he says.

SBCA’s 2015 award winners never envisioned how successful they would be in this industry. “I was studying mechanical engineering and had no idea where I would work,” says Gary Weaver. Component design “was just a part-time job.” Dan Holland’s start in the industry was even less glamourous: “I was unemployed,” he admits. “And fathers-in-law like their sons-in-law to be employed.” So Dan joined his father-in-law’s company. Jerry Vulgaris also entered the industry by joining the family business, but when his dad told him that it was a great place to make a career because there were so many good people to work with, Jerry brushed that idea aside. “As a young man, I thought, ‘yeah, whatever,’” he says.

Since those humble beginnings, Gary, Dan and Jerry have been all-in.

When Timber Tech Texas expanded in the late 1970s, Gary drove around the state seeking the right spot for a second location. He found San Antonio, pulled a small construction trailer behind an El Camino pickup to make the move, oversaw construction and had his plant running less than six months later.

Dan joined SBCA’s Hall of Fame in 2009 and joked that he’d need to do something noteworthy to keep his award. He promptly convinced an industry in the depths of a recession to start a major charity event. This year, BCMC Build expanded on a young but cherished tradition. Two homes, built side by side, made homeowners of two wounded veterans and provided new data for the Framing the American Dream initiative.

Jerry’s initial skepticism about working with others in the industry didn’t stop him from helping found the SBCA – Northeast chapter, joining the SBCA board and chairing the BCMC committee, helping with BCMC Build projects, and remaining active in SBCA even after leaving his position at a component manufacturing plant to join Trussed, Inc.

Jack Dermer, Rick Parrino and Mike Ruede presented awards at BCMC in October, and they couldn’t say enough about Gary, Dan and Jerry’s contributions to the industry. Gary has been SBCA’s top recruiter for years. “Even after he retired, he’s still recruiting people for the association!” says Jack, in awe.

Rick says Dan is consistently one step ahead of the rest. “He’s always the guy who comes up with ‘Why aren’t we doing this?’ ideas,” says Rick. “He’s the kind of a guy that says, ‘Let’s make this happen!’ and ‘I’ll start out by making a donation!’”

Mike was the one who first appointed Jerry to the BCMC committee, and the fact that he was the one to present this award, “just speaks volumes to the friendships in the industry,” Jerry says.

In fact, Gary, Dan and Jerry all credit their achievements to fellow SBCA members. Component manufacturing is “a hard livelihood,” Gary says, “and a hard livelihood depends on the industry.” No one can do it alone, Dan agrees. His best ideas, he says, come from working with others, “and the value that I receive from being a part of those meetings and discussions is far greater than anything I think I’ve contributed.”

Jerry has come around to his dad’s way of thinking—he now says his dad was spot on in recognizing how many good people make up this industry. It’s especially apparent, Jerry says, at BCMC Build projects, when everyone works side by side for a good cause. “You go back to your hotel tired and wet and muddy,” Jerry says, but it’s a good feeling. One that leaves you thinking, “This is why I do what I do.” 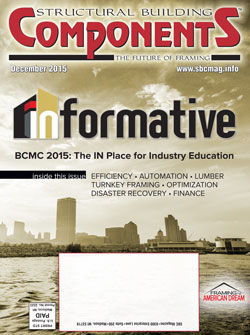 Fundamentally, Automation Is About People
Re-evaluating the Role of Your Inventory
Why Lumber Variability Is a Problem for CMs
Machine Rated Lumber Makes a Lot of Cents
Diversify Your Sales Revenue: Try Turnkey!
Backing Up Your Data Isn’t Enough
Let Your Numbers Give You Better Insight
Getting to the Buzz Behind the Buzzwords