Things are looking up for The Truss Company. Overall, sales are strong, and a new location will soon open its doors in Pasco, WA.

“This project is definitely outside the norm for us,” said Matt Yokes, Sales Representative for The Truss Company. In many ways, the project required some of the most important qualities that component manufacturers and the trusses they design and manufacture can bring to any project: ingenious design, versatile configurations, and the ability to work with other trades to make the completed structure a success.

While a church project isn’t something new for The Truss Company, this particular church did present some new design scenarios. In particular, the building designer wanted to use trusses for the steeples. “The steeples were a first for us, as far as building something like that out of trusses,” said Yokes.

“Steeples are usually stick built, but for this project, they wanted to try to do it with trusses. There’s a lot of complexity to get pre-manufactured trusses to work,” said Jake Lucas, Truss Designer on the project. Following the building plans, The Truss Company’s design team suggested a false-style decorative steeple constructed of trusses (see photo at right). In addition, one of the steeples also needed to serve as the base for a 4-ft.-tall stainless steel cross, so the trusses were designed to form a small platform for the cross to sit on (and attach to) at the top of the steeple.

The Truss Company looked at a few different hanger options for the steeples. Original plans called for a custom hanger solution, but when cost and the hanger specs needed for the “steel buckets” became an issue, the company chose to stub the trusses back to the girders and use standard hangers. “In the end, it was a bit more installation for the framer, but we eliminated some extra cost and high concentrated loads we would have had to incorporate into the truss design,” said Lucas.

Scissors trusses make up much of the church’s roof, with many completed scissors running over 15 ft. tall (see Figure 2 below). Due to their height, almost all of the scissors trusses on the project were capped (i.e., piggybacked). Capping the trusses made sense both from a design, as well as a production and delivery, standpoint. “Our roller press can go up to 14 ft., but we try to keep it below 13 ft., so it’s easier to transport to the jobsite,” said Lucas. The Truss Company used its engineering program to generate the design of the cap trusses, which were piggybacked at the jobsite.

Figure 2. Installation of a scissors truss. With a cap truss installed, many of the project’s scissors trusses were over 15 ft. tall.

Working with Other Trades

The building’s mechanical plans also played a key role in the roof design. Multiple spans and ceiling heights over the fellowship hall made it especially important for the plate heights to be set correctly. While an individual truss could be designed to be structurally sound, The Truss Company’s team knew that an unexpected mechanical requirement could lead to callbacks and field fixes. “If it’s wrong, it’s a big problem. I wanted to get it right the first time,” said Lucas.

Based on information from the mechanical contractor, The Truss Company’s team designed an intricate 4-ply girder truss, over 15 ft. tall with a cap truss, for the area next to the attic and mechanical platform (see photos in Figure 3 below).

Figure 3. The Truss Company’s team designed an intricate 4-ply girder truss, over 15 ft. tall with a cap truss, for the area next to the attic and mechanical platform.

Much like the positive experience with the mechanical contractor, both Yokes and Lucas said communication ran smoothly on the project. “We submit drawings so the architect and engineer can review, supply comments, and we can work through changes,” said Yokes.

“It’s nice to work with people who really know what they’re doing,” said Lucas. “They have enough notches in their belt. The contractors on this project were very experienced. You’re getting an experienced and reputable crew. We worked hard to meet them in the middle.”

A company “first,” designing the steeples out of trusses, also proved to be a good barometer for how the project would progress at the jobsite. Coworkers who happened to drive by the site on their way to work kept others in the office updated on the stages of construction. “I was happy to hear the steeples went up so cleanly,” said Lucas. “They saw the steeples were sheeted, so we knew it went well.”

Want to see your company featured in SBC Magazine? Send us hi-res photos and project details on your company’s unique project, and you just might see your company highlighted in an upcoming issue. Email ideas to editor@sbcmag.info. 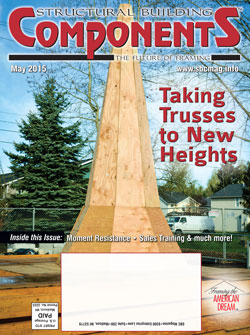