Broadcasting on all Channels

Broadcasting on all Channels

Do you ever find yourself watching a commercial, thinking “what the heck are they selling?” This most often happens to me during football games (because it’s the only live TV I watch since the invention of DVRs). Every Sunday, I’ll watch a game and see an ad for BDO or another company with a similarly mundane name. I’ll watch dozens of ads before even asking myself what goods or services they offer. Once I started paying attention, I realized BDO provides accounting and business services for large international firms, and I wondered, “how many decision makers for high-end international conglomerates are watching Sunday football like me?” My point is: just because you see something doesn’t mean you’re the target audience.

Similarly, some SBCA messages aren’t primarily aimed at component manufacturers (CMs). While the main objective of SBC Magazine and SBCA’s various weekly emails are to interest and inform CMs and their suppliers, these publications do have other goals, with both the near- and long-term interests of CMs in mind.

Take, for instance, the information on ASTM E119 fire testing of floor assemblies. Much of the information SBCA has published on this topic is intended first for code officials, regulators, lawmakers and the public record. Here’s the story and the reason why SBCA feels that delving into this issue is in the best interest of CMs:

As the 2012 version of the International Residential Code (IRC 2012) has been adopted by states and local jurisdictions across the Northeast and Midwest, floor truss and I-joist sales have been put at a competitive disadvantage against 2x10 joists. Under IRC 2012, floor trusses and I-joists must have a protective membrane applied to their underside, such as a layer of drywall or an approved proprietary coating. 2x10s do not require this additional protection.

The stated reason for this disparity is that 2x10s are assumed by the fire service to meet a traditional rule of thumb that says 2x10s have 20 minutes of performance in unprotected (exposed underside) floor systems, and other floor systems should meet this same standard. On its surface, this code change appears to be in the best interest of both homeowners and the fire service, who have the responsibility of protecting the lives of both occupants and firefighters.

In early 2015, SBCA conducted tests to confirm the results of recent testing by Under-writers Laboratories (UL) and determine the fire performance of various unprotected floor assemblies. The findings were definitive and confirmed that IRC 2012 relies on outdated data and anecdotal evidence. No method tested, including 2x10s, came close to the 15-minute membrane rating for drywall or the 20-minute rule of thumb firefighters rely on.

In fact, today’s code is a compromise between the fire service, the National Association of Home Builders (NAHB) and the American Wood Council (AWC). The fire service initially advocated for sprinklers in single-family homes as the most effective means to extinguish fires. Fearing increased costs of new homes, NAHB fought against sprinklers. AWC came up with the 15-minute membrane concept. After negotiations reflecting the interests of each party involved, the single-membrane code change and 2x10 exclusion was advocated by all parties. The fire service took a step in the right direction, increasing safety for floor trusses and I-joist floor systems. NAHB carved out low-cost 2x10s as a reasonable cost alternative to sprinklers. The AWC membership, in turn, received a windfall in increased wide-width dimension lumber sales, which retail at a premium compared to the narrow-width materials used in floor trusses.

Effectively, the agreement behind IRC 2012 uses outdated data and anecdotal evidence to restrict trade by creating a cost advantage for one method of framing floors over the alternatives used by SBCA members.

In this scenario, political negotiations have resulted in code changes that support the interests of specific groups. SBCA maintains that a level playing field for all products is in everyone’s best interest. Because their fire performance is similar, SBCA maintains all floor systems should be treated the same.

Like BDO, whose commercials reach all football fans instead of just those who also run large multinational corporations, SBCA has published its findings on all available channels, targeting one specific group (regulatory officials) but wanting to share information about what we do and who we serve with everyone.

SBCA continues to challenge the logic and methods used to adopt the IRC 2012 floor framing changes. SBCA has actively pursued local jurisdictions and states where the markets are most significantly affected by this code change, and has persuaded some to revise their adopted codes to reflect the scientific evidence of accredited testing. Although we don’t expect you’ll need to absorb every detail, we’ll continue to put out information to keep you in the loop about the research and advocacy we do to create a favorable marketplace for CMs. 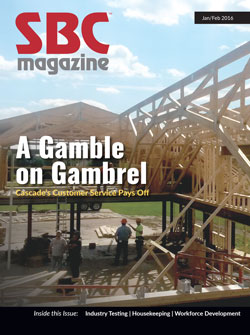 We Will Miss You, Mr. Truss
Industry Testing at SBCRI Is Multi-ply-ing
What the Code Says: Truss Placement Diagrams
Finding Workers Takes a Proactive Approach
Housekeeping: Get Back on Track
A Gamble on Gambrel: Cascade’s Customer Service Pays Off
Got Labor Issues? Go to the Source