Virtualization: Is Your Business Ready for It?

Virtualization: Is Your Business Ready for It?

One CM explains that, despite a few challenges, virtualization
is “potentially huge in its impact on IT efficiency.”

In IT, virtualization—the act of creating a virtual (rather than actual) version of computer hardware platforms, operating systems, storage devices or computer network resources—has rapidly become an integral part of the server infrastructure for organizations both large and small. While you might think your company is too small for virtualization, it may be time to reconsider and explore the potential cost savings related to computer hardware, power usage, cooling costs and productivity that virtualization offers. Jason Hikel of Shelter Systems Limited and John Holland of Clearspan Components Inc. recently reflected on their experiences with virtualization.

“For me, server virtualization can be summed up in three words: peace of mind. I am able to worry less about catastrophic situations knowing that my organization’s server infrastructure is protected on multiple levels with the features and functions my chosen virtualization platform provides,” said Hikel.

“My chosen virtual solution also adds levels of redundancy to my infrastructure that I wanted in the past, but were too costly because those roles required separate hardware” continued Hikel. “Now, creating a failover SQL or Domain Control server is as simple as spooling up a new virtual machine (VM) and making the appropriate configuration changes.”

If that benefit description leaves you feeling a little lost, you’re not alone. “Like many things in the IT realm, it can be hard to explain the intricacies of virtualization to those outside of the department,” said Holland. The first step is not going over the details; it’s simply making a case for virtualization. “For many companies,” Holland points out, “the decision to virtualize will come down to the trust management has in the recommendation of their IT professionals.”

If you’re new to virtualization, it can be hard to know where to start. “Not many IT teams in the industry just happen to have a resident expert in virtualization,” said Holland. “Only after some trial and error will you really know if you have a solution that will work.”

In general, the process begins with setting up a host server, which is a physical server running multiple virtual machines, known as guests. In most cases, you’ll want to invest in redundant host servers. This will allow you to redeploy virtual machines on a backup server in the event of a hardware failure.

Depending on your virtualization platform of choice—a variety of commercial and free solutions are available including VMware, Hyper-V and XenServer—you should be able to house quite a few guest  servers on a single host. Your mileage will vary based on server load and the CPU, RAM, network capacity and storage available on the host machine.

If your business has only one or two servers, switching to a virtual server environment may not be worth the investment. However, many small businesses are finding that the cost-to-benefit tipping point isn’t far above that. In most cases, if you are running four or more servers in your business, an investment in virtualization will pay for itself quickly.

If you’re interested in giving it a shot, there are a number of low-risk and low-cost options for getting started. With a relatively cheap physical server or even a well-provisioned desktop machine, you can set up an environment that will allow you to better understand virtualization and see for yourself what you’ve been missing.

“Virtualization is the present and future of computing,” said Hikel, “The costs continue to be driven down, and the technology continues to get easier and easier to use. Any business looking to upgrade their server-
side infrastructure should be looking at virtualized solutions and do everything they can to not add another physical box to their system.”

About the Author: Ben Caldwell joined SBCA staff in 2010, but he’s been a web developer and technology junkie since the 90s. He has a background in information/communications technology R&D and a strong interest in emerging technologies and open source. 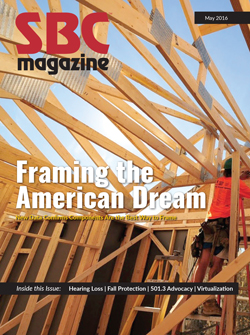