May You Live in Interesting Times

May You Live in Interesting Times

Good things happen when you bring people together.

There’s an old Chinese proverb that says, “may you live in interesting times.”  Certainly, the last five years qualify as “interesting” in the structural components industry, although you could just as easily describe them as “scary” or “challenging.” To me, some of the most interesting things have actually occurred in the last six months.

When the Southern Pine Inspection Bureau put forward a recommendation to immediately reduce the Southern Pine lumber design values by 25-30%, our industry responded swiftly and effectively. Out of that response, we began to have fruitful two-way conversations with lumber producers. This discourse culminated in a Lumber Summit held May 14-15 in Charlotte, NC. At this inaugural summit, 71 participants, including key lumber industry leaders, the top five lumber producers in North America, and component manufacturers representing approximately 700 million board feet of U.S. structural lumber purchases, were in attendance.

The summit was hosted by SBCA, but the meeting itself was run by the component manufacturers and lumber producers. We spent the first day touring the Builders FirstSource truss plant, which gave many of the lumber producers their first opportunity to see how we actually use their products. I overheard a few of the lumber producers in my tour group express surprise at the level of sophistication involved in what we do.

After the plant tour, we took a tour of the Charlotte Motorspeedway and had dinner there. It was an informal opportunity for all the attendees to get to know one another and start building relationships. In the end, it’s those relationships that will likely prove to be the most valuable outcome of the summit. Having the opportunity to talk one-on-one with various mills gave me greater insight into the opportunities and challenges we as component manufacturers face with regard to lumber supply.

The next morning, we all gathered together and spent a few hours talking about lumber properties, design values and how they affect component design and performance. It was a ground-breaking discussion for both industries, and revealed a number of areas where there were misconceptions or misunderstandings about how the other operates and produces its respective products. These discussions have prompted the BCMC Committee to put together three educational sessions on lumber for component manufacturers at BCMC in October, which will be presented by the lumber producers who attended the summit. Look for more information on those sessions in the BCMC Attendee Promo included with this month’s issue or online at bcmcshow.com.

Finally, out of the summit we created the SBCA Lumber in Components Council (LCC). The LCC will continue to gather periodically throughout the year in order to bring component manufacturers and lumber mills together to continue building relationships and working through issues to the mutual benefit of both industries on a manufacturer-to-manufacturer basis. We really have much in common in many ways.

Another interesting recent event was the plant tour and wood truss workshop that took place at Shelter Systems Limited in Westminster, MD. Held on June 2 during the U.S. Fire Administration’s National Fire Academy’s annual conference for their Fire and Emergency Services Higher Education (FESHE) Program, 112 fire service officials from across the country turned their focus to light-frame construction. During this educational event, attendees learned a great deal about the capabilities and functions of a structural building component operation with particular emphasis on how components are engineered and manufactured.

The tour was actually several years in the making, because the SBCA Capital Area Chapter has been working with the FESHE conference for four years. Last year, Shelter’s Director of Technical Operations, Bob Dayhoff, gave a presentation at the FESHE conference, and, based in part on the feedback from that presentation, Dayhoff, the Chapter and SBCA successfully convinced FESHE to include the tour and truss workshop as part of this year’s event.

The plant tour was a powerful opportunity to have a significant impact on the minds of fire service educators from across the country. These are the people who are training the current and next generation of emergency responders, and giving them a first-hand glimpse at what we do and how we do it will pay dividends for decades to come. All of the evaluations from the tour were positive, but to pick just a few:

“The tour during the FESHE Conference is one of the most informative I’ve ever participated in. It was beneficial to have so many knowledgeable individuals present to explain structural components backed up by what appeared to be valid and objective evidence. The knowledge gained during the tour will greatly enhance my ability to present topics to my Building Construction for Fire Protection course.” —Terry Spoor, Fire Protection Technology, Southeast Community College, Nebraska

“It was a great tour. I learned a lot. As first responders, we can learn how to be safer by attending events like these.” —Melvin Byrne, Virginia Department of Fire Programs

“Thank you for having us tour the truss plant and the excellent presentation. I know that your time is valuable and I appreciate your dedication to further enhance the positive relationship between the fire service and the building industry.” —Doug Smith, Portland Community College, Fire Protection Program, Orgeon

It’s comments like these that convince me our industry needs to embrace plant tours as our most effective outreach tool and commit to hosting many more in the future with the fire service, lawmakers and building officials. These are certainly interesting times, and now that the economy and the housing industry are finally headed in the right direction, it is events like these that will ensure our industry is poised to thrive like it never has before.

SBC Magazine encourages the participation of its readers in developing content for future issues. Do you have an article idea for a future issue or a topic that you would like to see covered? Email your thoughts and ideas to editor@sbcmag.info. 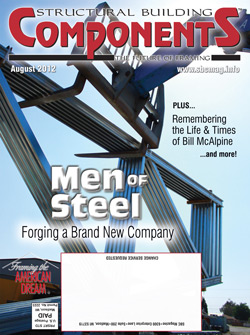