Bringing Stability Back into Our Truss Plants

Bringing Stability Back into Our Truss Plants

Perhaps we should take a good look in the mirror and ask ourselves if we are doing everything humanly possible to create environments where people are willing to stay for the long haul.

I realize that the folks who are actively involved with SBCA talk a lot about how great SBCA programs are and how every component manufacturer (CM) should put them to good use in their business. Well, that’s not just talk. I, for one, really do believe the message that we are preaching. You too may believe this message, but have some very good reasons why you have not taken full advantage of these programs. In the component industry, one of the greatest challenges is, of course, the current work force, turnover and workforce development. How does turnover affect your decision to participate or not participate in SBCA programs?

Here’s one example that I know some of us are struggling with. Truss Technician Training (TTT) is arguably one of the most powerful tools SBCA has to offer. Some companies even require new hires to already have at least TTT Level 1 under their belts before coming to work for them. Let’s look at a couple of scenarios that are somewhat troubling:

Scenario #1: Company X hires Jane Doe as a Level 1 designer. Jane is really intelligent, has two years of experience in the truss industry, and has completed and passed TTT Level 1. She is extremely excited to work at the company and promises to be a rising star in the organization. She hits the ground running, and a wise design manager begins getting her back on track to complete the next two levels of TTT. One year later, she passes TTT Level 2 and is now attempting to move forward with Level 3. Did I mention that Jane Doe is married to Bob Doe, an officer in the armed forces? Yes, you guessed it. Bob has been given orders to move to Germany in two months. If you're thinking that he will leave his bride behind to work at the truss plant, you are sadly mistaken. So now what? Company X has invested money into her education in order to fill the organization with highly skilled and trained individuals, but this employee is leaving the country.

Scenario #2: Company Y looks at hiring Bill Doe from a head hunter. The job would require a move that would put Bill a thousand miles away from his home, but he really needs a job and has several years of experience in the truss industry. Unfortunately, his former employer did not send him through TTT, but Company Y is so impressed with Bill that this isn't really an issue. The company hires Bill with plans to send him through TTT Level 1, 2 and 3 rather quickly. And so it goes. Company Y spends the time and money investing in Bill. For the next few years, Bill is a rock star at the company. He designs trusses in his sleep, works weekends, and even helps train new employees. He breezes through all three levels of TTT. The individual who hired Bill is a super star! But wait—the economy begins to strengthen, and Bill starts to receive weekly calls from his former employer. Company Y hopes that the head hunter is not calling him as well. Bill has been given an offer he can’t refuse, and he knocks on the design manager’s door with that look that can’t mean good news. Bill is leaving Company Y to go back home. Again, time and money invested is now lost.

Of course, these scenarios don’t just apply to truss technicians. If you’ve invested in programs such as In-Plant Basic Training, In-Plant WTCA QC, Operation Safety, ORisk, and many others, turnover can really hurt. Perhaps we should take a good look in the mirror and ask ourselves if we are doing everything humanly possible to create environments where people are willing to stay for the long haul. Sometimes changes are necessary in order to make that happen.

Recently, I was faced with a request that I would have typically said no to. One of our truss technicians, a single father, asked me if he could come in to work an hour late if he didn’t take a lunch break. He had to take his daughter to school and daycare in the mornings. Our business has historically been a stickler on start times, days off, etc., so my immediate response was to say, “no.” I felt that granting this request might not be fair to the rest of our staff who are so diligent to make it to work on time. But then I got to thinking about what this young man was sacrificing in order to raise a child. While the rest of his friends might be out living it up, he's dedicating himself to a very worthy cause—his daughter, who he is doing his best to turn into a fine young woman. He's also a great technician—dedicated, loyal, and he loves his job. What more could I ask for in an employee? So, while my initial 'policy-oriented' response was "no," after some consideration, my 'take-all-factors-into-account' answer became a “yes.”

There are probably many ways that we can work on employee retention that we haven’t thought of before. Today, I’m reaching out to my fellow CMs and asking you to offer some suggestions that we can post in an upcoming issue. What are some ways that we can bring stability back into our truss plants? If we have the confidence that our employees are dedicated and committed to our businesses, I believe that we can put SBCA's tools to work without the fear of wasting money and time.

Our trade association truly is great, and so are the programs that are available to help our businesses. I would love to see us use these tools more effectively. After all, these programs were developed by you, the members of SBCA, and the great staff that supports us. We shouldn’t let them go to waste. If you have been hesitant to implement them for whatever reason, let’s figure out what we can do to help each other overcome these obstacles. Please send your comments and suggestions to Emily Patterson. 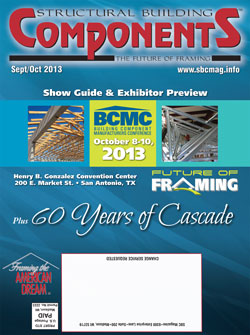 Bringing Stability Back into Our Truss Plants
Pay Attention to the Grade Stamp
You Don’t Know What You Don’t Know, Part II
Parting Shots