Hitting the Hill: Sharing with Congress Our Industry's Perspective

Hitting the Hill: Sharing with Congress Our Industry's Perspective

At least that is the belief of most members of Congress, based on feedback from lawmakers and legislative staffers on Capitol Hill. If you were to only listen to the national media to formulate an opinion on housing, you would probably reach a similar conclusion. While it is true that the residential construction market has definitely improved, with April housing starts over 850,000 and total U.S. permits just over one million, housing is certainly not “fixed.”

The message component manufacturers (CMs) and industry suppliers brought to Washington this year, as part of the 2013 SBC Legislative Conference in May, was one of cautious optimism. It was an overall message that, while the economy is slowly improving, along with demand for structural components, the industry is currently in a delicate position. For those companies that have survived the prolonged downturn, emerging from it is proving just as challenging as navigating through the low point.

Indeed, many CMs find themselves in a place where regulatory policy or taxation changes could mean the difference between continued growth and bankruptcy. Unlike past years, instead of focusing on one main issue or piece of legislation, manufacturers and suppliers sought to share a big-picture narrative of how governmental action (or inaction) can have an impact on our industry.

CMs and suppliers began their narrative setting the record straight that the housing construction market is not necessarily fixed. Builders are finding that production bottlenecks are pushing up materials costs, land prices are rising, and labor—available, and willing to work in the construction industry—is hard to find. The Department of Labor reports there are currently 116,000 unfilled positions open in the construction sector, a post-recession high .

Over the past year, oriented strand board surged 68 percent, while gypsum products such as sheetrock climbed 18 percent. Rising material costs and labor shortages are impacting the components industry as well. For example, the price of lumber, our primary raw material, surged 44 percent in 2012. That is the largest one-year increase since 1993 .

While construction jobs go unfilled, projects get delayed and so does the demand for our industry’s products and services. The same can be said about delays to viable building projects because funding can’t be secured from financial institutions due to restrictions imposed by government regulations and banking regulators.

There is little Congress can or should do with regard to market forces and competition. However, Congress can have an influence on the labor shortage problem through passing comprehensive immigration reform. It can also help deal with project delays by addressing federal involvement in construction finance. Finally, through reforms to our nation’s complex system of taxation and regulation, the overall business environment in America can improve dramatically.

At the heart of the immigration debate is the proper balance between protection of national security and the need to ensure employers continue to have access to a steady pool of available workers. While CMs and suppliers were sensitive to this fact as they spoke with lawmakers, they also impressed upon them a sense of urgency. They argued that now is the time to pass comprehensive immigration reform. The system needs to change soon to pave the way for more skilled and unskilled workers to legally enter the country to work and live.

As the economy continues to grow and construction activity returns to a more solid footing, immigration reform will play a significant role in determining whether this growth continues, stalls or falters. Many of the skilled and unskilled workers who once were part of our industry, and the overall construction industry, have left and taken jobs in other sectors of the economy. Foreign-born workers have traditionally played a vibrant and important role in the construction labor force while also acting as an important home buying constituency.

To this end, legislative conference attendees informed lawmakers of our industry’s support for the Border Security, Economic Opportunity, and Immigration Modernization Act (S.744) , brought forward by the bipartisan “group of eight” coalition in the Senate. This legislation addresses the need for a new market-based visa system (W visas) that would allow more immigrants to legally enter the manufacturing and construction workforce each year. However, manufacturers warned the artificially low cap on W visas included in the introduced version of S. 744 appears to ignore the value the manufacturing and construction industries contribute to the nation's GDP.

CMs and suppliers were quick to recognize that the financial crisis that led to the most recent economic downturn was due, in large part, to credit being issued to individuals who could not sustain long-term repayment of those loans. While it was prudent for lawmakers to take measures to avoid a repeat of this situation, they argued that the pendulum has swung too far in the opposite direction. Today, one of the biggest problems facing the construction industry is that lending decisions are now being dictated by one-size-fits-all regulations.

Our industry argued that a full-fledged economic recovery will not happen until Congress and regulators restore the ability of financial institutions to make credit available based on their local knowledge and common-sense assessment of the viability of individual construction projects and business operations. In visits with lawmakers, CMs recounted how our industry regularly witnesses small- and medium-sized residential and light-commercial builders finding it very difficult to obtain credit for viable construction projects that would result in positive economic growth.

There is pent up demand for houses, condominiums and light-commercial buildings in many parts of the country. Yet, residential construction lending is down 79 percent from its peak in 2008. Meanwhile, all other types of commercial construction lending are off by 62 percent for the same period . As long as lenders refuse to make loans for viable building projects, CMs and suppliers argued everyone suffers and business growth is stifled.

In meetings with Congressional lawmakers, our industry pointed out that the Patient Protection and Affordable Care Act is imposing significant new mandates on them as employers (see the Obamacare article on page 14 for more information on how). They pointed out that, given this example of significant unintended consequences, it was imperative that government carefully consider future intervention efforts that could further jeopardize our industry’s ability to succeed.

Conference attendees also shared how our industry is made up of many small businesses who now find themselves compelled to contemplate making decisions based on government mandates, as opposed to making common sense-based or market-based decisions.

On the other hand, one of the greatest obstacles to increased economic growth and higher standards of living in this country is its complex and constantly changing tax code. To make matters worse, not all businesses are treated equally under our complex tax system, forcing businesses to consider ways to restructure their company in order to achieve more fair taxation.

As a consequence, CMs and suppliers impressed upon Congress that it is time for comprehensive tax reform that restores balance to our system of taxation, allows America’s small businesses to remain competitive and viable, and improves our nation’s overall business environment.

This year’s SBC Legislative Conference attendees brought this message to Capitol Hill: while the housing industry is improving and providing better sales opportunities for our industry, the federal government’s actions (and inaction) make it tougher to transact business. In passing confusing and unfair tax laws, as well as an overly complex and bureaucratic health care overhaul, while simultaneously failing to act on necessary reforms to our nation’s immigration and financial systems, it is exceedingly difficult to make good business decisions with any level of confidence.

By making our concerns known to member of Congress, we have done our part to raise awareness of these significant issues. It’s anybody’s guess what Congress will do to address them, but one thing is for sure, the coming months will continue to be full of challenges without a dull moment. 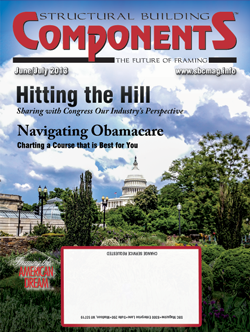