Seismic Design Coefficients: How they are determined for light-frame components Part 2

Seismic Design Coefficients: How they are determined for light-frame components Part 2

More on Why Seismic Design Coefficients (i.e., factors)
are important to engineering innovation

In Part I of this article the proprietary and non-consensus-standard-based means of assigning seismic design parameters to alternative sheathing products given in ICC-ES AC130, Acceptance Criteria for Prefabricated Wood Shear Panels,* was reviewed. We made the following observations regarding AC130:

The consequence of the inherent problems in AC130 is that newly-developed alternative products may fail to meet the AC130 equivalency parameters and be considered not equivalent even when they have equivalent to or better performance than WSP shear walls.

In short, alternative products are not allowed to have the same range of performance as WSP shear walls. If WSP shear walls that fail to meet the equivalency parameters can use an R factor of 6.5, while alternative systems that fail to meet the equivalency parameters are required to use an R factor of 2, the ability of alternative products to compete in the marketplace is inappropriately constrained. Currently, all roads to a competitive market are perceived to require equivalency to WSPs and the use of a proprietary and non-consensus-standard-based method called an “AC” (i.e., AC130, AC322, AC440, etc.) created by ICC-ES, a private, non-profit business. As a consequence, the reality is they control all seismic design innovation.

This is great for the “in” products, like WSP, because it gives them a clear competitive advantage. A better methodology for determining seismic design coefficients (SDCs, or also known as Seismic Design Parameters) that can provide more accurate comparisons between different systems is necessary.

SBCA has used its extensive amount of ASTM E2126 test data to develop an energy-based methodology that can provide more meaningful comparisons for testing and defining SDC equivalency. The goal of this work was to provide a rational method for determining the R factor based upon empirical test data. The basis for this methodology is Section 12.2.1 of ASCE 7, which states:

Seismic force–resisting systems that are not contained in Table 12.2-1 are permitted if analytical and test data are submitted that establish the dynamic characteristics and demonstrate the lateral force resistance and energy dissipation capacity to be equivalent to the structural systems listed in Table 12.2-1 for equivalent response modification coefficient, R, system overstrength coefficient, Ω0, and deflection amplification factor, Cd, values.

The equivalent lateral force procedure for seismic design contained in ASCE 7 assumes an idealized linear-elastic behavior of the structure. This is done because the idealization simplifies the engineering equations used for seismic design. However, structural elements or buildings seldom remain linear-elastic until failure. Most real structures have a non-linear, inelastic response to seismic loads. See Figure 2 for an assumed linear response compared to the actual non-linear response of a real building. The terms and symbols used in Figure 2 follow the definitions given in ASTM E2126.

As seen in Figure 2, a linear response would result in much greater seismic loads on the structure. The purpose of the R factor is to reduce the seismic loads to a level that is consistent with the non-linear response of an actual building. This reduction is possible due to the energy dissipated by a building’s non-linear, inelastic behavior and the building’s structural overstrength. Hence, the R factor can be divided into two components: a ductility reduction factor, Rd, and a structural overstrength factor, Ω0.

The ductility reduction factor, Rd, accounts for the reduction in seismic forces due to the energy dissipation resulting from inelastic behavior. The area under the load-displacement curve can be used to measure the energy dissipated by the structure as it is forced to move (deflect) by the ASTM E2126 test cyclic loading protocol.

In an ASTM E2126 test, this produces hysteresis loops as shown in Figure 3 below.

A backbone (or envelope) curve, as shown in Figure 4 below, is obtained from the hysteresis cycles by connecting the point of maximum load from each loop.

Using the area under the load-displacement curve as a measure of the energy dissipated by the structure is a key concept of the “Equal Energy Method” for determining seismic design coefficient equivalency in accordance with ASCE 7, Chapter 12.

By equating the area under each curve, the formula for calculating the ductility reduction factor can be derived as

Ductility ratio, cyclic (D), n—the ratio of the ultimate displacement (Δu) and the yield displacement (Δyield) of a specimen observed in cyclic test.

As seen in Figure 2, the R factor, Rw, is the product of the ductility reduction factor, Rd, and the structural overstrength factor, Ω0:

The Rw factor, determined using the above equation, reduces the earthquake forces to an allowable stress level. The commentary to ASCE 7 provides the following discussion of the difference between R and Rw:

Past design practices (the SEAOC and UBC requirements prior to 1997) for earthquake loads produce loads intended for use with allowable stress design methods. Such procedures generally appear very similar to this standard, but a coefficient Rw was used in place of the response modification factor R. Rw was always larger than R, generally by a factor of about 1.4; thus the loads produced were smaller, much as allowable stresses are smaller that nominal strengths.

This reduction produces an R factor that reduces forces to a strength level, instead of an allowable stress level, and allows a direct comparison to the R factors in Table 12.2.1 of ASCE 7.

Using the available ASTM E2126 data, SBCA has calculated the ductility and equal energy R factor for the 48 WSP shear wall tests contained in the AC130 database5. In addition, SBCRI has conducted cyclic tests on 12 shear walls in a 12’x30’ building and 34 shear walls in a calibrated single element test station.

The single element test station was designed to produce results similar to the tests in the 12’x30’ building. This is important to note, since a shear wall itself cannot actually have a set of SDCs. The seismic design parameters (R, Ω0, Cd) can only really apply to the overall building structure.

This is because in a real structure, the stiffest portion of the structure is going to take the entire load until it yields and then there will be a progressive sharing of load and progressive yielding. To say that an individual element has a set of SDCs that can be relied upon during a seismic event is challenging since the limit state for earthquake design is based upon system performance, not individual element performance. SDCs then become engineering estimates of performance characteristics to aid in appropriately placing structural elements to resist seismic loads. An ideal element for resisting seismic loads is one that:

The plot in Figure 7 shows the ductility of WSP shear walls can vary significantly. The variability in the shear wall ductility results in a wide variety of R factors for walls sheathed with WSPs. The calculated R factor for the AC130 database tests ranges from 3.3 to 7.6, while the calculated R factor for the SBCRI database tests ranges from 3.7 to 7.7. However, all of the AC130 database shear walls have a code-defined R factor of 6.5 per ASCE 7. This doesn’t make good engineering common sense.

The current building codes do not contain a definitive mathematical methodology to establish the R factor, or any of the SDCs for a building system or the building components that make up that system.

Instead, seismic design literature frequently states SDCs currently adopted by the building code are largely based on observations of past seismic performance and committee judgment.1,7,8,9,10 In other words, they are engineering judgments with the goal to simplify ASCE 7 Table 12.2-2 at a time when computers were not as readily available to provide more precise solutions.

Today, computational capabilities allow scientific principles, or equal energy mathematics in this case, to easily be used when better answers are desired. This provides a means of assigning SDCs based on the actual tested performance of a system.

The unfortunate aspect of today’s situation is more sophisticated solutions are confronted by simplifying assumptions like AC130/AC322 Appendix A so they can fit into an ASCE 7 Table 12.2-2 tradition.

Hence, SBCA’s goal is to use its knowledge and better data analysis to understand real structural wall panel performance and provide credible comparative equivalency results with known boundary conditions that fully conform to the traditions of ASCE 7 Table 12.2-2.

Using currently available literature, and its extensive amount of industry test data, SBCA has developed an energy based methodology that provides a more rigorous means of testing and defining SDCs.

Introducing a mathematical model like the method described in this article for determining the R factor into the building code should be done, but this will likely take a significant amount of time given the politics involved in the code development process, and all the vested interests that exist in preserving the status quo. Innovation causes competition, and competition reduces profits for traditionalists, groups like ICC-ES, etc. and codified products like WSPs.

The equal energy method provides a more precise means of assigning seismic design coefficients which, in turn, allows for a more rational means of new product development and innovation to take place in an efficient and cost effective manner. SBCA’s method has been under development since September of 2011, and we have taken every precaution to ensure the analysis and conclusions are correct.

This work can easily be seen as disruptive to the status quo. That said, SBCA believes it is in the SBC industry’s, the engineering community’s, and the general public’s best interest to publish its innovations in order for the body of engineering knowledge to increase. Transparent communication allows everyone to make their own judgments and to provide comments and feedback that may result in corrections and/or further innovations.

The ultimate goal of this work is to help all industries be best served with transparent, free and unfettered competition as the rule of engineering and trade.

* ICC-ES Acceptance Criteria are proprietary documents. ICC-ES policy states that “5.1 Acceptance criteria are established by the committee to provide a basis for issuing ICC-ES evaluation reports on products and systems under codes referenced in Section 2.0 of the Rules of Procedure for Evaluation Reports. They also clarify conditions of acceptance for products and systems specifically regulated by the codes. Acceptance criteria may involve a product, material, method of construction, or service. Consideration of any acceptance criteria must be in conjunction with a current and valid application for an ICC-ES evaluation report, an existing ICC-ES evaluation report, or as otherwise determined by the Evaluation Committee only. All approved criteria are available for sale at www.icc-es.org/Criteria/index.cfm. Also ICC-ES AC322 Appendix A Acceptance Criteria for Prefabricated, Cold-Formed, Steel Lateral- Force-Resisting-Vertical Assemblies. www.icc-es.org/Criteria_Development/1212-alt/AC322.pdf
**When calculating the R factor using the EEEP curve, the overstrength must be calculated using the yield strength of the idealized elastic-plastic curve as follows: Pyield / 0.4Ppeak. This results in an overstrength that will vary but is always somewhat less than 2.5. However, the actual amount of overstength in the element depends on the maximum load resisted by the wall, Ppeak. This actual overstrength is always equal to 2.5 if the design strength is set as 0.4Ppeak. The actual overstrength of the element is given in the article for comparison to the typical values given by NEHRP. 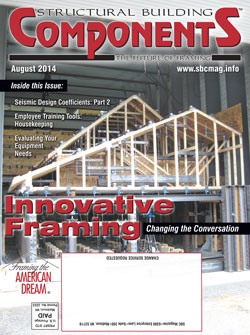 Seismic Design Coefficients: How they are determined for light-frame components Part 2
Top 10 Employee Training Tools: Housekeeping
Do You Need a Swiss Army Knife?