In Pursuit of a Better Performing Truss

In Pursuit of a Better Performing Truss

“The cost of the individual component isn’t really the issue at hand. We want to give you a better performing truss for the application.”

When it comes to getting the right structural building components for a project, cost isn’t everything, but how do you convince the building designer? Communication is key, says David Mitchell, Operations Manager with Engineered Building Design (EBD) in Washington, IA. When he gets the opportunity to discuss a project with an architect or engineer, Mitchell works to provide specifiers with the knowledge they need to use the proper product for the application. Done well, this revised thinking can result in a more cost-effective component and labor solution. “You can help them understand our product better and the implementation of a design change,” Mitchell explains. “The cost of the individual component isn’t really the issue at hand. We want to give you a better performing truss for the application.”

One way EBD goes about building a better performing truss is with the raw material it uses. More than 20 years ago when the company first opened its doors, EBD chose to almost exclusively use MSR lumber. The decision just made good business sense, says Mitchell. “Using MSR was what our competition was doing. We evaluated and decided to do the same,” he said. “MSR helps us make sure we’re putting out a top-quality product.”

The company’s lumber choice worked then and continues to give EBD a benefit it can offer customers in the form of greater design flexibility. In addition to working with specifiers to get the full potential out of its truss designs, the company has even surprised a fellow component manufacturer now and then. "Years ago, another truss manufacturer asked us, ‘How do you make that design work?’” recalled Mitchell. “I told him we designed to the loading and deflection criteria using better MSR.”

Focusing on custom residential projects as its bread and butter, EBD strives to meet the ever-growing design complexity of the single-family home. For example, Mitchell says he sees more and more buildings that try to incorporate scissors and trays into hip roof systems. “Sometimes you have to work hard at your designs to make something structurally sound,” he said. EBD also uses the more reliable design values of MSR to reduce the amount of web bracing and web restraint, when possible.

About 20 percent of the company’s business consists of larger multi-family and commercial projects, which can press design limits even further. On multi-family floor truss projects, EBD’s designers encounter some especially long spans that push floor truss span-to-depth boundaries. “Sometimes architects and engineers overspan floor trusses,” said Mitchell. “You have to go back to them and let them know there can be performance issues, they should consider narrowing the spacing, and the reasons why. MSR helps us make some of those longer spans work using the existing expected spacing, while meeting the deflection and L over D criteria.” He also noted that using higher lumber grades helps prevent his designers from having to use double chords in certain instances.

Figure 1. The roof of the Maharishi University student union and dining hall included a Kalash, an opening that crowned the top of the building.

The company encountered some unique design challenges when it got the job to design and manufacture trusses for a student union and dining hall for the Maharishi University of Management in Fairfield, IA. The contractor, who specializes in more complicated projects, had some needs outside of the usual large, educational structure. The building was designed according to the principles of Maharishi Vedic architecture, which lays out specific guidelines for the proportion, orientation and placement of rooms and the building itself, along with other design criteria that address the building’s relationship to the land surrounding the structure and using natural and nontoxic construction materials (see Figure 1).

Trusses were a practical choice for the project, given that components can be accurately designed to a specific set of loading and load path conditions. EBD supplied the roof and floor trusses for the student union and dining hall. Constructed of 22' tall scissors trusses, the roof included a Kalash, an opening that crowned the top of the building. “Because of the size and shape of the trusses, with a clerestory and huge scissors trusses, MSR was important—number one, because of its strength values, and number two, because you also want the reliability of the design values.”

Figure 2. A 53' girder truss supported a second-floor walkway in the building.

In addition to the roof and floors, EBD designed other portions of the building out of components. A 53' girder truss supported a second-floor walkway in the building (see Figure 2). The risers in the auditorium were even built out of trusses with a 150 lb. live load, so that the area underneath could be used for storage.

Assembling and getting the components to the jobsite also posed some interesting challenges. The customer asked if the trusses could be field spliced at the jobsite. After evaluating the site, weather forecast and schedule, EBD determined that the jobsite conditions weren’t conducive for field splicing. The company chose to use the much more reliable setting in the truss yard and field spliced the trusses with a press purchased especially for the project.

Figure 3. A house mover transported the trusses approximately 30 miles from EBD’s truss plant to the jobsite.

Due to the size of the components once they were spliced, a house mover transported the components to the jobsite (see Figure 3). While this isn’t the way EBD’s components are typically delivered, Mitchell said the house mover had the right equipment for the job. “They literally walked the load down the road, and did things like turn the back axels as needed to avoid an obstruction,” he explained.

Plenty of preparation led up to installation on the jobsite, with EBD taking part in multiple planning meetings. “The project team had several meetings leading up to installation, to make sure we were on the same page with the design, and then to figure out what we’re supplying and how they’re going to install,” said Mitchell. During that process, EBD recommended a spreader system to help with installation (see Figure 4).

Mitchell says the project is a good example of how, at EBD, “We build a lot of complex stuff.” The company’s pursuit of building a better performing truss paid off, with the company later working with the university again on a sustainable living center project. 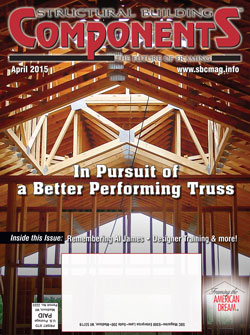