A little up-front effort can have significant downstream effects.

Recently, Michael Balliet, general manager of a Builders FirstSource plant in Shelby, Alabama, ran into unexpected maintenance: a roller press had to be taken out of production to be serviced. “It was something we could get fixed easily enough,” he explained, “but it was a bit of a scramble at the time.” Any component manufacturer can relate, but that doesn’t make it any less frustrating. Fortunately, there are easy steps that extend the longevity of equipment and help it run safely and more efficiently.

For example, creating pre-shift checklists for each machine can make a big impact on a piece of equipment’s reliability. “We have a full-time maintenance person who has a physical checklist to go through,” said Adam Finkenhoefer, production manager at Truss Systems in Oxford, Georgia. “Some of our other maintenance is quarterly,” Finkenhoefer explained, “but our finish presses, forklifts and saws have a routine that is covered daily.” Truss Systems beefed up their preventative maintenance program a couple of years ago, and they’re already reaping the benefits with less unplanned downtime.

Not surprisingly, just keeping the sawdust under control can be a big help when it comes to equipment function—so much so that Finkenhoefer added a full time housekeeper to his crew. “We hired a retired gentleman who was looking for a little bit of light-duty work,” Finkenhoefer explained. “He vacuums a little and mops the office floors. Then, at every break time, he blows all of the dust off the saws and gets as much sawdust up off of the floors as he can.”

David Strevig, operations manager at Shelter Systems in Westminster, Maryland, agrees that preventative maintenance doesn’t have to be anything crazy, “just general cleaning and greasing and spraying for each machine.” With that small, daily clean-up effort, “downtime is so reduced,” Strevig stressed. As a bonus, Strevig likes the way it feels to walk in to work each morning. “It’s like I’m walking into the same brand new plant,” Strevig explained. “Every. Day.” Getting to that place didn’t happen overnight, but Strevig and his crew did it, he says, because they “found out the hard way” what happened when they weren’t attentive to their equipment.

A lot of folks might argue that they can’t afford to put a good program in place, but Strevig argues that “you really can’t afford not to.” Even when he adds up all of the expenses of his two-person, full-time maintenance crew, “it’s still less than all of the other expenses when a machine is down.”

As always when trying something new, patience is a virtue. While Finkenhoefer said he hadn’t come across any surprising changes in his tenure at Truss Systems, there are sometimes “interesting pop-up problems that take a little bit of trial and error” to diagnose. And no matter how steadfast you are about preventative measures, aging equipment can be frustrating.

Eventually, however, an investment in preventative maintenance will pay off. As part of Finkenhoefer’s plan, he put into practice a saw calibration training program. “At first, there was probably more downtime than normal because they were unfamiliar with the process,” Finkenhoefer explained, “but once they had done it a few times it resulted in a lot more uptime. Plus, it’s really good cross training. Now we’re covered if someone is off or on vacation.”

Unplanned downtime in a production environment can have a negative effect on the schedule and it can be incredibly expensive—especially when it’s the result of an equipment breakdown that forces several employees to stop working until it is fixed. “When we’re not being diligent about preventative maintenance,” summed up Balliet, “absolutely we get behind.” If you’re not doing any sort of structured preventative maintenance, Balliet said, “it’s easy to end up spending all of your time being reactive instead of proactive. You just end up putting band-aids on problems.”

About the Author: Molly E. Butz worked with CMs to develop the original SBCA Operation Safety Program and has over 12 years of experience helping CMs develop and maintain safety best practices. 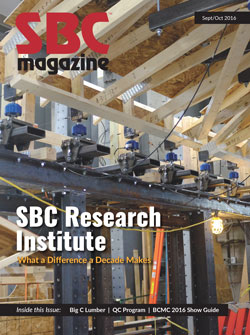