In-Plant Wood Truss QC is an easy-to-implement
step toward improved productivity in your plant.

Kylmala Truss in Saginaw, Minnesota has only been using SBCA’s updated In-Plant Wood Truss QC program since the summer of 2015. Yet Shawn Jorgenson, head of quality control, says it’s already added value to the business and provided a sense of security.

“Without a question it has made the inspection process better and that’s made our business better. It’s taken us to another notch. We were detail oriented before the program, but this has made us that much better,” Jorgenson said.

One of the many upsides Jorgenson has noticed is employees’ ability to learn about their productivity through the QC process. Summary reports highlight which stations are operating efficiently and which could increase productivity and limit inadequacies with an increased focus on a particular part of the process. Kylmala Truss has the benefit of being a small operation where employees can sit down for a quick review.

“It’s incredibly easy to use now that we’re six months in. The transition has been very rewarding. By making myself better, that translates over into the crews,” Jorgenson said. “As the inspector, there’s so much detail to the program, it makes you think downstream when you’re inspecting.”

Component manufacturers (CMs) are using SBCA’s In-Plant Wood Truss QC software to better understand their own QC process and areas of need. Under the leadership of Dave Motter, P.E., of Louws Truss, the SBCA QC Committee wanted to combine an in-depth approach with a platform that was easy to use. Those attributes are the hallmarks of the new program.

Rob Eason, plant manager at Clearspan Components, Inc. in Meridian, Mississippi says it’s been so easy that you don’t need prior experience in the QC process to understand how to use the program. “Our lead QC Inspector had no previous construction experience. We gave him on-the-job training about the truss industry and an overview of the QC process used by the industry and he was able to pick up the program very quickly.”

Bob Dayhoff, director of technical operations at Shelter Systems Limited in Westminster, Maryland, echoes those thoughts, and says the transition from the old SBCA QC program to the new version was very well thought out and didn’t require much of a change on their end.

“There was very little adjustment to pick it right up. We had used the old one right after we got our new plant up in 2005,” Dayhoff explained. “The best word I can think of is ‘intuitive’.”

Change can be difficult, but Dayhoff insists no one had trouble learning the new format. Even more important than the smooth transition was the immediate impact it had. Crews could perform inspections and have the majority of the information compiled in one report, making it easier to understand.

“We use the reports as a learning tool,” Dayhoff said. “We get together with production managers and go over issues seen on those reports. If we have a high percentage ‘off conformance,’ we bring that to our foremen’s attention and get into the details of the data about the truss, what joints are the ones out of conformance, what plates are off, that kind of stuff. This allows us to see if this is a one-time issue or a trend and to provide solutions as needed.”

And the best part? “My IT guys love it too!” Dayhoff said. “Why? Because it’s cloud based. They don’t have to worry about storage records. It’s kind of transparent to the CM. You don’t have to expend extra effort.”

About the Author: A graduate of UW-Madison with a degree in Journalism, Matt Tanger has five years of experience in residential home construction. As a technical writer and member of the SBC Magazine team since 2014, he works closely with members of NFC and SBCA. 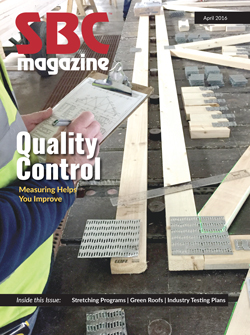